What I Learned on My Twittercation (and Facebook Fast)

In the spirit of elementary school teachers everywhere that make you write about your summer vacation, I'm writing about my vacation from Twitter and Facebook! Hee hee. :-)

Being off of Twitter for a week and Facebook for a week and a half was very hard. I seriously had become addicted to both. At least I could admit I had a problem. I did cheat by checking briefly what was going on while I was stuck somewhere waiting with nothing to do. I didn't post though. But, my lesson learned from that is never go anywhere without a book or notebook. That's what I SHOULD have been doing.

I did get a lot of writing done during this vacation, which was the major point of the exercise. Would have gotten a lot more done if I hadn't gotten the flu, but I digress.

As much as I love chatting on both Twitter and Facebook, this break was good for me because I realized just how much time I truly spend that could be spent writing, napping, or even (eek!) cleaning.

So what did I do on my Twittercation?
1) Edited, revised, edited, revised some more, wrote a new scene, edited, and revised, all in hopes of making Book 1 better and ready for querying.
2) Re-wrote my query letter a couple of times and now, IMHO, it is quite awesome!
3) Worked on my synopsis since I feel like it's too dry.
4) Worked on evil day job work.
5) Had a 3 hour lunch with some fab YA writers to talk about our plans for world domination.
6) Watched WAY too much tv while sick in bed with the flu.
7) Watched Wolverine and swooned over Hugh Jackman and Ryan Reynolds.
8) Snuggled with the fur kids.
9) Napped.

I missed all my fabulous Twitter and Facebook buddies! But now I'm back, although I probably won't be around as much as before. Got lots of writing to get done. :-)
Posted by Jess Capelle at 1:19 PM 2 comments:

In honor of starting NaNoWriMo today, I decided to re-visit something I wrote after I finished last year’s NaNo (my first). I learned a lot while writing my first book, which I am finishing final edits on as we speak. It will be going out to my critique peeps for a final look in the next day or two, and then query letters will go out mid-month. I think it’s quite appropriate that I’m finishing book 1 as NaNo is starting. NaNo got me to put my butt in the chair and write. I’d had the idea for the book for 8 years, but it was always something I’d do “one day”. Thank you to the NaNo gang for getting me to finally write that book!!

If you want to track my progress or be my NaNo buddy, my NaNo page is: http://www.nanowrimo.org/eng/user/433001

Tonight at 6:45pm, I finished with 50,229 words. I met my personal deadline of finishing by 7pm so I could watch a movie and relax in front of the fire tonight. There is no way to describe how I'm feeling right now. I've had the idea for this book for years. I had done some outlining and character development and a lot of research but hadn't really written much. The NaNo challenge was my opportunity to force myself to do it- if I told people about it and gave myself a deadline, I'd have to write it, right?

My novel is not terribly pretty right now. It's like a diamond when it comes out of the mine- dirty, a little yellowed, and needs to be cut. But then the master jeweler starts cleaving, polishing,and cutting... and before you know it, it's sitting in the window at Tiffany's as a flawless piece of art. I have a lot of chipping, polishing, and cutting to do. I have to beef up wimpy sections,rework awkward transitions, and break up lengthy dialogue passages. But I have a diamond in the rough. I have the raw material to shape now. I'm no longer sitting there with the map and shovel planning my dig. And you know what? A lot of it is pretty darn good! :-)

What did I learn along the way?

- The first sentence is the hardest (I knew that, but this cemented it).

-The last sentence is the easiest.

- There are a thousand things a day that will keep you from your novel. Don't let them.

- Novel writing requires crunchy and salty things (and lots of them), as well as creamy and sweet things. You must have all on hand because you never know which craving will strike.

- Having a writing cap helps tremendously. It keeps all the ideas contained so they don't fly away.

- Cats do not like it when you spend too long typing on the computer. Just saying.

- Something I knew already, but need reminding of constantly : Anything you dream of doing, you can do. You just have to take the first step and keep putting one foot in front of the other.

Even if this novel never were to be published, I am a novelist. No one can take that away from me. I think that's pretty cool. It will be cooler when I can say "published novelist" though! :-)

So now, I’m embarking on NaNo number 2 with book number 2. I’m revisiting all my lovely characters and throwing a few new ones in along the way. This year, though, I don’t think I need the writing cap. Instead, I’ve got a sparkly writing ring that a friend gave me in honor of my angel book. :-) And yes, I'm a NaNo Rebel this year because working on a sequel is breaking the rules. At least I'm a rebel WITH a cause! lol

I’m stocked up on drinks and snacks, have told everyone I’m on a Twitter and Facebook fast for the first week, and figured out a way for Cat 2 to snooze in my lap while I still type on the laptop. Now to put on my writing ring and get to work! 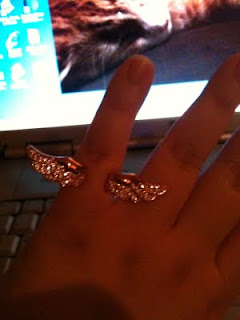 Posted by Jess Capelle at 2:29 AM No comments: